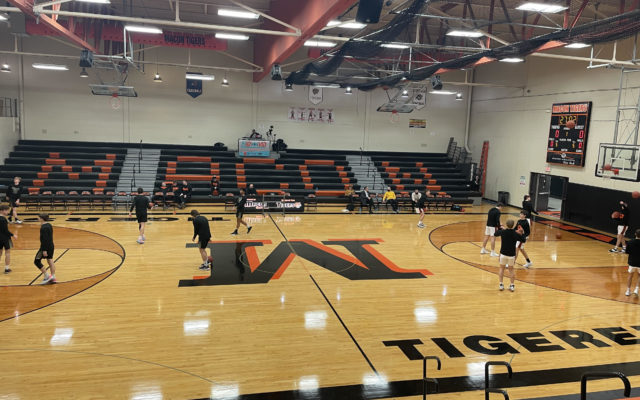 The Kirksville and Centralia boys advanced to the Macon Tournament semifinals with Tuesday victories.

Centralia defeated Harrisburg 72-57. The Panthers pressured the Bulldogs from the tip and built a 22-7 lead after the first quarter.

Eric Duick with the calls on KRES and centralmoinfo.com. The 6-5 Panthers produced the last 14 points of the first quarter. Centralia head coach Scott Humphrey explained the quick start.

The top-seeded Tigers jumped to a 19-6 advantage after the first quarter. First-year Marceline head coach Mike Severa said his team wasn’t able to keep up with the bigger school.

An offensive rhythm eluded Marceline, largely due to the Kirksville press. Meanwhile, Tyler Martin’s team had no problems on the offensive end. Sophomore Isaac Danielson led all scorers with 20, followed by senior Noah Copeland with 15. Marceline didn’t have any double-digit scorers, but Will Heller and Sam Gillman guided the Tigers with seven points apiece.

In a rematch of last year’s Macon Tournament championship game, Kirksville faces Centralia in the semifinals Thursday. After the boys quarterfinal games Tuesday night, the Moberly girls topped Marceline 69-44 in the consolation semifinals.