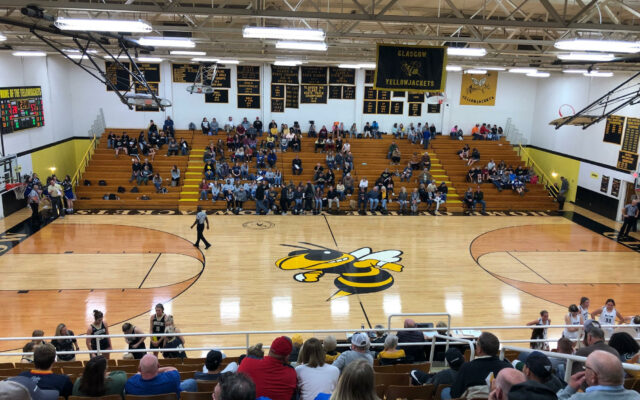 In the girls game, the Lady Cats improved to 3-0 with a 64-45 victory. In a chippy game, the Lady Cats built a 32-25 lead at the half. Cairo extended the lead to nine midway through the third quarter, then put the game out of reach with a quick series of scores.

Scott Lunte with the calls of Gracie and Avery Brumley’s three’s, and Macie Harman’s two on KRES and centralmoinfo.com. The Lady Cats gradually extended the lead in the second half for the final score. Cairo coach Brian Winkler said the Lady Cats needed a physical and chippy type game.

Harman scored a team-high 16 points for Cairo. New Franklin drops to 1-3; however, coach Morgan Vetter said they are close to racking up the wins if the defensive effort continues.

Bulldog junior Addy Salmon scored a game-high 18 points. The Lady Cats get the La Plata/Glasgow semifinal winner in Saturday’s championship game, while New Franklin gets the loser for third place.

In the boys game, the Bearcats held New Franklin to 14 second half points enroute to a 55-34 victory. Cairo coach Nic Zenker explained how they were able to tighten up the defense.

The Bearcats also hit eight, three’s in the game. Bulldog coach Ross Dobson said that was only part of their undoing.

The 3-0 Bearcats await the Westran/Slater semifinal winner for Saturday’s championship tilt, while New Franklin faces the loser in the third place game.

In the consolation semifinals, the Marceline girls defeated Westran 61-28, and the Fayette boys defeated Glasgow’s JV 59-33. You can hear all four coaches postgame interviews below: