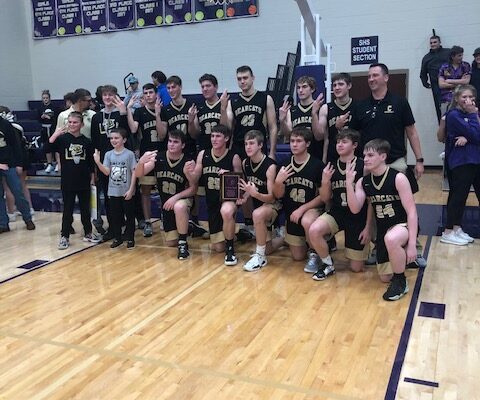 Cairo defeated Salisbury 55-53 in the boys championship. The host Panthers erased a six-point deficit with a 7-0 run late in the fourth, but Bearcat senior Jack Prewett answered on the next possession.

Eric Duick with the call on 99.9 The Captain and centralmoinfo.com as Cairo took a 54-53 advantage with 1:15 left. 11-1 Salisbury proceeded to commit two turnovers. Bearcats head coach Nic Zenker reacted to a third straight Salisbury Tournament championship.

Junior Ryan Tracy drilled a three at the first-half buzzer to pull Cairo within one, then the Bearcats entered the fourth up 46-44. Tracy scored 13, and fellow junior Logan Head paced 9-3 Cairo with 15. Salisbury head coach Kenny Wyatt addressed the mistakes.

Colin Schowe with the calls. Roush finished with 10 points while Miranda Patterson added 20 to lead all scorers. South Shelby girls coach Luke O’Laughlin said his team did a good job battling through some shooting struggles.

South Shelby improves to 11-2 on the season and has now won two tournament titles. Cairo was led by Macie Harman with 15 points. Cairo girls coach Brian Winkler said he was proud of his team’s effort.

Khloe Wyatt sat due to injury, and Micah Guilford remained out with an illness. 8-4 Salisbury trailed by a couple possessions much of the night, then tied it at 40 with three minutes left. Freshman Julia Sloan completed the comeback with a few late buckets in an 11-point effort. Teammate Rachel Fessler netted 16. Meadville’s Korrie Holcer delivered 16 for the 10-3 Lady Eagles.

In the boys third place game, Glasgow held Carrollton to eight total points over the course of the middle quarters on its way to a 46-30 win. The Yellowjackets received hot shooting from Drew Sanders as he led all scorers with 26 points, including seven three-pointers. Glasgow boys coach Mick Cropp said the defensive adjustments they made following the first quarter made a difference.

Glasgow improves to 7-4 on the season. Carrollton was led by Treyton Bennett with 15 points. The Trojans fall to 5-6 under first-year head coach Zach Glassmaker. You can hear full postgame interviews with the coaches online at centralmoinfo.com.