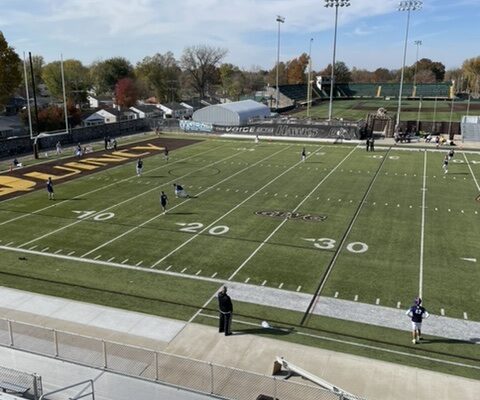 Truman scored 38 unanswered points to pull away from Quincy for a 59-32 win across the river this afternoon. It was the Bulldogs 7th straight victory, which is the longest winning streak in 28 years.

The Hawks jumped on top with 10 early points and led 19-14 with 4:24 left in the first half. Truman freshman running back Denim Cook scored the second of his four rushing touchdowns on the day just over two minutes later to give the ‘Dogs the lead for good…

Brad Boyer with the call on Superstation KRES and centralmoinfo.com. The Bulldog defense got a 3-and-out and Truman tacked on a Grant Ross 38-yard field goal with four seconds left in the half to make the score 24-19 at the break. The Bulldogs used a fake punt to keep the opening second half series alive and Cook capped the possession with a nine-yard TD. Then, the snowball got rolling…

Shamar Griffith of Hannibal had a career day with 177 yards rushing and a touchdown. Along with his four scores, Cook ran for 154 yards.

The Bulldogs improve to 7-1 and improve to 4-0 in the GLVC. Truman “Senior Day” will be next Saturday against McKendree. You can hear the game on KRES starting at 11:15.