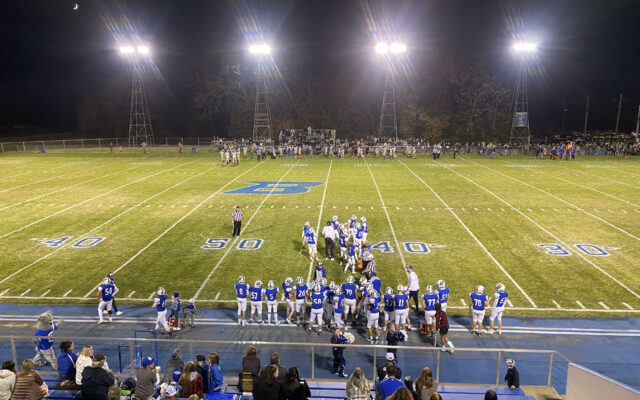 The Brookfield Bulldogs won an instant classic over rival Marceline 30-29 in overtime. The teams entered overtime tied at 22. Marceline got the football first and quickly scored courtesy of Canaan Wright…

Steven Findley Jr. with the call on KRES and centralmoinfo.com/ Brookfield then scored on a Colton Parn touchdown pass to John Walgren. The Bulldogs then elected to go for two…

Brookfield trailed midway through the fourth quarter 22-14 before mounting a game-tying drive capped off by a Colton Parn 6-yard touchdown run. The Bulldogs then got a stop on Marceline’s next series and had one final opportunity in regulation, but Caleb Stallo came up with an interception on a Colton Parn throw to send it to overtime. Both teams traded scores throughout the entire contest, with neither side leading by more than one score. Brookfield gets its second win of the year against Marceline. Bulldogs coach Cory Luke says it means more to have two wins against their rivals.

Colton Parn unofficially threw for 202 yards and had three total touchdowns. Luke detailed the discussion in the huddle before the game-winning 2 PT-conversion.

Marceline coach Joey Peterson said his defense was a strength on the night as well as the entire season.

Peterson praised his team’s resiliency after a 0-4 start to this season.