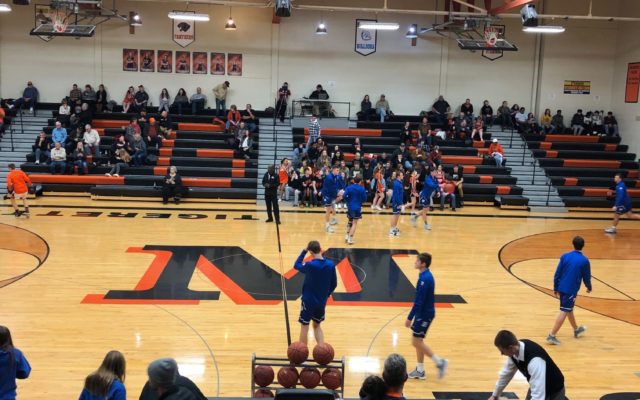 The Brookfield Bulldogs defeated the tournament hosts 53-47 in the final contest of the evening. The Bulldogs surrendered a 28-22 lead at the half as the Tigers ended up taking a 45-40 lead off a series of and-ones in the fourth quarter. Brookfield senior Cooper Cisna answered the call to Macon midway through the fourth quarter.

Scott Lunte with the call on Superstation KRES and centralmoinfo.com. The Bulldogs preserved the lead the rest of the way and made free throws down the stretch. Prior to the game, Brookfield was caught in traffic from an accident on Highway 36. As a result, the start of the game was delayed by about 35 minutes. When the Bulldogs arrived, they hopped off the bus, had a quick warm-up, and then took a 21-8 lead after the first quarter. First-year coach Carey Davison was proud of the adversity his team faced all evening.

Cisna scored 16 for the 10-4 Bulldogs, while Macon drops to 3-12. Freshman Boston Douglas scored a team-high nine points. Brookfield plays Centralia in the semifinals while Macon meets Moberly in a consolation game.

Centralia topped Moberly 74-42 in the two-seven game. The Panthers outscored the Spartans 23-8 in the third quarter.

Eric Duick with the calls as 10-3 Centralia ballooned its lead in the back half of the third. Panthers head coach Scott Humphrey received 25 bench points.

Harrisburg’s Tanner Lanes scored a game-high 23 points as the Bulldogs drop to 7-8. 5-8 Mexico faces top-seeded Kirksville in the semifinals.

Both Noah Copeland and Cody Bryant scored 14 points as Kirksville won its ninth straight game. Sam Gillman and Will Heller paced 4-9 Marceline with six points each.

Coverage of the Macon Tournament continues Wednesday with the girls semifinal games at 5:50pm on KRES.

Hear full postgame interviews from the boys quarterfinal games below: