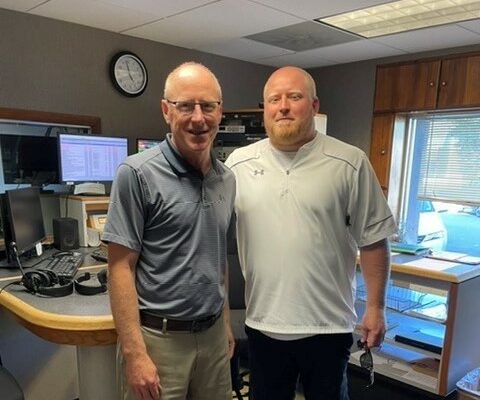 A Moberly Spartan gets to lead the district’s boys basketball program. 2008 graduate Brett Boyer becomes the head coach after receiving approval from the Moberly Board of Education at today’s (Tues) meeting. Boyer says it’s meaningful to get his first head coaching job at his alma mater….

Boyer takes over for Cord Hagedorn, who guided the Spartans the last five years. He says their relationship will make the transition seamless…..

Boyer was an All-State linebacker for the 2007 Moberly football team that went undefeated until the state quarterfinals and will continue as the Spartans Defensive Coordinator. He isn’t surprised that basketball is the sport where he will get to lead a program for the first time….

Boyer has been an assistant coach for Lady Spartans basketball the last eight years. He says it is tough to leave that program…..

New Moberly boys basketball coach Brett Boyer, who just completed his seventh year as a Moberly Middle School science teacher, along with his coaching duties. He is a graduate of Truman State University where he went to play college football and later ended up gaining coaching experience with the Bulldogs.

Brett is the oldest son of our radio stations’ Operations Manager Brad Boyer. You can find the full interview on the Magic City Sports Talk page at centralmoinfo.com or listen Friday morning at 9:32 on KWIX.