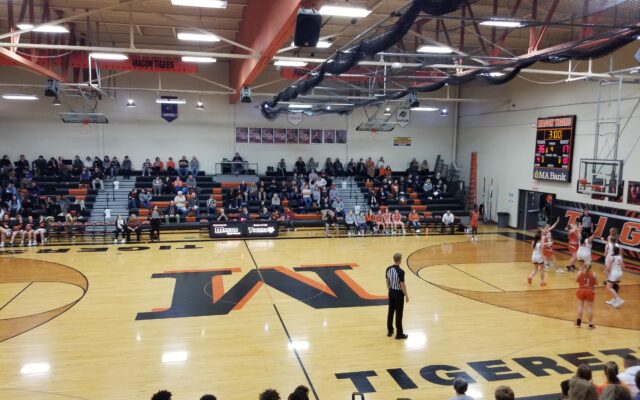 Both Kirksville teams held off rallies from Macon Tuesday night.

The boys held on 78-71. There were seven lead changes in the first five minutes of the game but Kirksville led from that point on. Cole Kelly’s hot hand created distance.

Austin Ward with the calls on KRES and centralmoinfo.com. Kelly finished with seven threes and a game-high 27 points. Kirksville pushed the lead to 15 early in the fourth before Macon started its rally.

Hayden Lovingier led Macon’s offense with 16 points. Macon got as close as four but free throws sealed the game for Kirksville, which attempted 26 free throws total to just 13 for Macon. Along with Kelly’s 27, Isaac Danielson chipped in 25 for 11-4 Kirksville. Macon coach Dale Devenport was disappointed with his team’s effort.

The Kirksville girls brought home a 40-35 win. Macon trailed by 10 at half and its largest deficit was 13 before outscoring Kirksville 14-5 in the third quarter.

8-7 Kirksville was led by Channing Totta’s 12 points while Macon’s Brooke Weimer had 11. Macon coach Natalie Garlock said her team’s mentality improved throughout the course of the game.