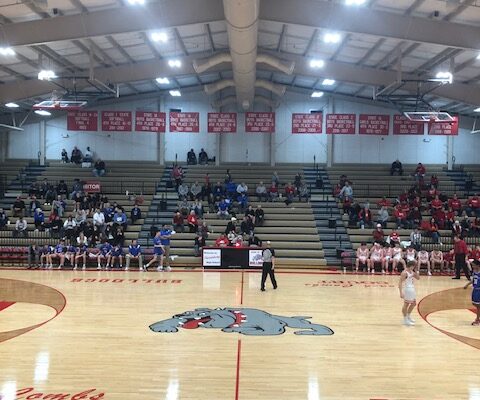 In the boy’s game, Harrisburg trailed by as many as twelve points in the first half but rallied in the second half for a 70-56 win. The Spartans held a 31-27 lead at halftime only for Harrisburg to take control with an 11-0 run to start the third quarter. Braden Wyatt provided the go-ahead basket for the Bulldogs early in the quarter.

Colin Schowe with the call on Superstation KRES and centralmoinfo.com. The Spartans fell behind 38-31 only to rally to hold a brief 41-40 advantage. The Bulldogs then responded with an 18-0 run from the end of the third quarter through the start of the fourth quarter to put the game away. Harrisburg boys’ coach Kyle Fisher said he was proud of his team’s response in the game.

Wyatt led the Bulldogs with 33 points as they improve to 12-4 on the season. Derieus Wallace led the 2-12 Spartans with 20 points. The game was a chippy affair with three technical fouls issued. Moberly boys’ coach Brett Boyer said the start of the third quarter was their undoing.

In the girls’ game, Moberly dominated the middle quarters on their way to a 59-35 victory over Harrisburg. The game was tied at 12-12 at the end of the first quarter, but Moberly proceeded to outscore the Lady Bulldogs 29-6 over the next two quarters to cruise to the victory. Moberly girls’ coach Tony Vestal said their defense was key in the victory.

The Lady Spartans were led by Grace Billington with 18 points while Kennedy Messer added 14. Moberly improves to 10-7 on the season. Carli Ellis was the lone Lady Bulldog in double figures with 13 points. Harrisburg girls coach Ryan Richardson said this game will serve as a good learning experience for his young team.

Harrisburg slips to 9-8 with the defeat.