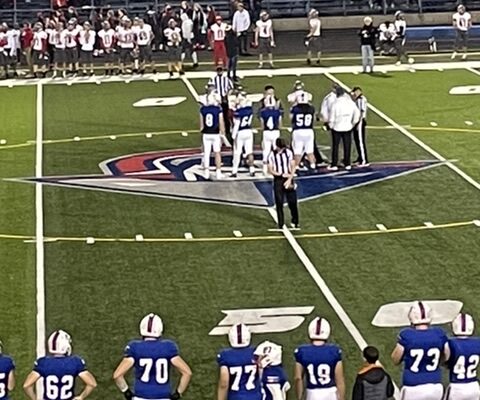 Moberly scored on its first four possessions and it was enough in a 28-14 victory over Mexico Friday night at Dr. Larry K. Noel-Spartan Stadium. The Spartans took the opening kickoff and marched 64 yards in ten plays. Gage St. Clair scored on a nine-yard run. The Bulldogs fumbled on their first play from scrimmage at the 36. The Spartans took advantage of the turnover and short field…

Brad Boyer with the call on KWIX and centralmoinfo.com. Derieus Wallace capped the third Moberly possession with a one-yard touchdown run to make the score 21-0, after a two-point run by Collin Huffman got back a missed extra point kick. The Bulldogs used just two plays to score from 64 yards out. Anthony Shivers broke away for a 42-yard touchdown run. The Spartans answered right back….

Mexico was set up 1st and goal at the three late in the first half. The Bulldogs got stuffed on a 4th down play at the one yard line to keep the score 28-8 at halftime. Mexico coach Steve Haag said that was a big play….

The Bulldogs got the only score of the second half on a five-yard run by Ryder Staddie (stad-dee) with 4:41 left in the third. Moberly coach Cody McDowell discussed his team’s first half offensive execution….

Huffman was 9-of-12 passing for 96 yards and two scores and ran for 65 yards. At 4-4, the Spartans increased their lead in the district and likely wrapped up the top seed. Moberly will wrap up the regular season by hosting Jefferson City next week in a game that can be heard on KWIX. Shivers had 104 yards rushing in the loss. The Bulldogs drop to 3-5. Both teams wrap up NCMC play with a record of 2-3. Mexico will host Warrenton next Friday.