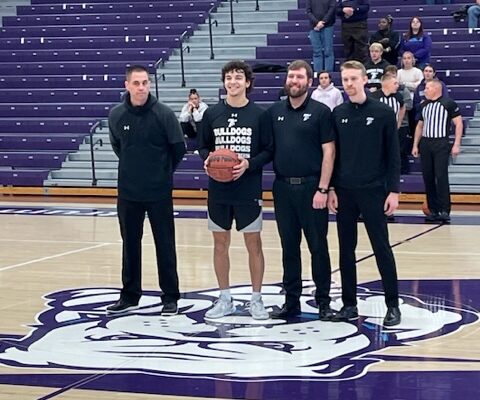 Hannah Belanger moved up to 3rd on the Truman career scoring list, while the Rockhurst men overcame the loss of their leading scorer, in a split at Pershing Arena Saturday.

Belanger hit seven three-pointers to lead the Bulldog women to a 75-62 victory over Rockhurst. The game was tied at 43 when Truman scored the last seven points of the third quarter. Claire Rake had a key play to help swing the momentum the Bulldogs way…

Brad Boyer with the call on Superstation KRES and centralmoinfo.com. Leading by six points in the fourth, Belanger nailed her final triple….

Belanger scored 25 points passing Felicia Sutton and ending the game three shy of 1,600. Ellie Weltha added 20 and is three points away from 1,000 for her career. Coach Theo Dean thought his defense was key….

The Bulldog women remain in second place in the GLVC at 7-1 and improve to 11-5 overall. Keegan Sullivan scored 16 for Rockhurst. The Hawks drop to 2-6 in the conference and 7-9 overall.

The Rockhurst men played without the GLVC’s leading scorer and rebounder in the injured Rich Byhre. Timaris Brown filled the gap. The freshman scored 30 points and grabbed 16 rebounds to lead the Hawks to an 88-71 victory over Truman. Jake Auer scored 20 of his 25 points in the second half to help Rockhurst move to 5-3 in the conference and just a game out of first place. Bulldog coach Jeff Horner gave credit to the Hawks, but wants more energy and smarter decisions from his team….

Dylan Peeters scored 14 points to lead Truman and Clark County’s Brandon Kracht and Trey Shearer both added 12. The Bulldogs fall to 6-10 overall and 1-7 in the GLVC. Rockhurst is now 10-6.

The Bulldogs’ Hunter Strait was honored before the game for scoring 1,000 points earlier this season.

The Truman teams will wrap up the homestand by hosting Southwest Baptist on Monday. The doubleheader will start with the men’s game at 3:00, followed by the women. Coverage on KRES will begin at 2:45.