Bearcats Beat The Bulldogs In A Top 3 D2 Matchup 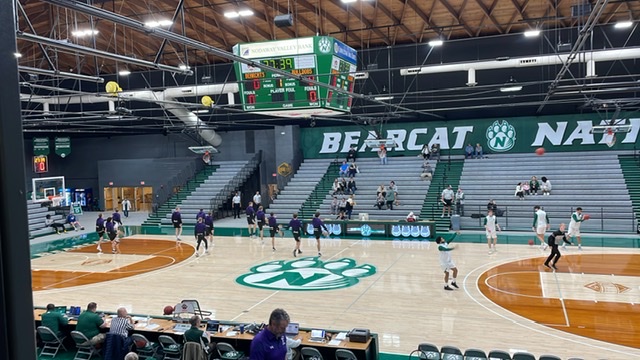 A new NABC Division II Men’s Basketball poll released ahead of the Truman at Northwest Missouri State Tuesday night had the Bulldogs ranked number two and the Bearcats at number three. With that as the backdrop, the defending national champions got 49 combined points from their backcourt combo of Diego Bernard and All-American Trevor Hudgins in an 86-76 victory over Truman. The Bulldogs go used an 18-0 advantage in bench points to take a three point lead with just over three minutes left in the first half…

Brad Boyer with the call on Superstation KRES and centralmoinfo.com. Northwest led by four at intermission and by as many as 11 in the second half. Truman coach Jeff Horner said his guys competed on the road against the top program in Division II basketball in recent years….

Cade McKnight led Truman with 25 points. Bernard had 25 and 12 rebounds for the Bearcats and Hudgins had 24. Northwest improves to 5-1 with the win. It was the first loss in five tries for Truman. Horner was asked his takeaway from the matchup of D2 heavyweights….

Horner’s Bulldogs shot 55 percent in the loss. Northwest kept the ‘Dogs at bay down the stretch by hitting 22-of-24 free throws. Truman will play at Upper Iowa on Saturday. You can hear the game on KRES starting at 1:45.

The Truman women lost to 16th ranked Union, Tennessee 67-60 at the Drury Thanksgiving Classic. Union finished the third quarter and into the fourth on a 15-0 decisive run. Up to that point, the Bulldogs had a 44-41 lead. Maddie Re led Truman with 15 points. The Bulldogs will play Saginaw Valley State today (Wed) at 1:00.